I’ve been back from Croatia less than a week and I miss the place. If you want the quick answer to, “would you recommend it?” The answer is YES!

This was our first family holiday abroad with Daisy who recently turned 2.

For our first holiday we booked an all inclusive hotel and managed to bag a kid free place meaning even though Daisy is over 2 years old we didn’t pay a penny for her.

The hotel we stayed at was called TUI Family Life Bellevue Resort which was located in Rabac and was classed as 4 stars. We flew into Pula and the flight was around 2 hours from London Gatwick Airport.

WHY WE CHOSE CROATIA – We chose this hotel in Croatia because we didn’t want a child orientated holiday instead we wanted a holiday which catered for children. What I mean by that is that is we wanted there to be lots to do with Daisy but lots for us to do too. We love walking and exploring culture and so we chose a hotel where we could walk to a town and explore what’s outside of the resort.

TRANSFER – The transfer to the hotel was around 50 minutes on a coach. I read a lot of reviews to say the journey was awful on winding mountain roads however I didn’t find it bad at all. Take precautions if you suffer from travel sickness though.

HOTEL – The hotel is located on the side of a mountain. I did so much research before I went and I knew that this would mean waiting for lifts and walking down some fairly steep hills however I think this is a great sacrifice to make when taking into consideration the location, breath taking views and small flat walk to town. The hotel is only a few years old and looks beautiful in the photos and it honesty doesn’t disappoint. It’s spilt into different blocks and has 5 pools including an infinity pool with slides and splash pools for babies and toddlers which include interactive water features and small slides. The family and relax pool were both salt water.

To get around the hotel you can either walk around the outside which means some steep slopes, take the stairs or wait for the lifts where you sometimes need to use two or more lifts to reach your destination.

ROOM – We chose a family room with balcony, sliding doors and limited sea view. This meant once Daisy was asleep we could close the sliding doors and she would have her own bedroom. It was before the balcony and completely secure. The balcony doors had numerous locks with the main chain lock being high up even I had to be on tip toes to lock. Inside Daisy’s partition room she had two sofas and space for her cot. The cot we were given was a travel cot although others in the hotel were given a wooden cot much like you’d have at home. She had a sturdy mattress, sheet, duvet and pillow. We opted to take our own light weight sleeping bag.

Our limited sea view actually wasn’t very limited. We could see the sea in all its entirety. It’s breathtaking. The balcony was large with glass high enough for me to not worry about Daisy. We had a table and 4 chairs as well as a a couple of lines to dry our clothes which folded against the wall once finished.

Our bed was so large I couldn’t even poke my boyfriend to tell him to stop snoring! My pillow was far too soft but fear not, hey have a pillow menu some even have lavender inside. They charge for some of the replacement pillows at 25 kuna per day which is around £3 per day. I chose the orthopedic pillow which was free as I love sleeping on hard pillows! I thought this was a lovely touch though and slept like a dream once I got it.

We had a shower, double sink and separate toilet. The room had a fridge, kettle with tea and coffee, wardrobe and drawer space and safe. We didn’t have an iron but got one from reception. They did say that we could only really keep it for a couple of days though as they don’t have enough.

One downside to the room was the door didn’t lock from the inside. Daisy loved opening the door which was annoying although she didn’t run out but had we of visited 6 months prior then it would have been a disaster!

(I don’t have any photos of our room so taken them from the website. Our room was exactly like this expect we had a sea view) 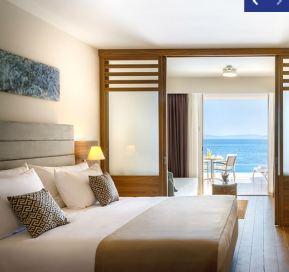 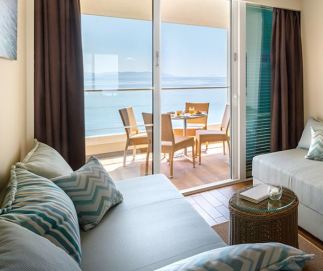 FOOD – We aren’t fussy eaters so we loved the food. The Buffet was where you went for Breakfast, Lunch and Dinner. They had a kids section with a mini buffer cart so kids could choose for themselves where they had plastic cutlery, bowls, plates and cups. Also had ‘fun’ looking foods for example sandwiches made to look like turtles. To be honest we steered clear of the kids area and got Daisy food from the main buffet.

The high chairs used were ikea ones and they had the trays available as well.

Some examples of breakfast were – cereals like muesli, rice puffs, chocolate puffs, fruit, toast, yogurts, pancakes, pastry’s, cheeses and meats, eggs all the ways, omelette made to order, beans, sausage, bacon. Healthy bar where you had things like goats cheese and light milk.

Lunch – was a hot buffet which varied. They have a vegetarian section, pasta, fish section, salads, fruit and puddings.

Dinner – was themed. When we were there we had Croatian, American, Italian, Istrian and Asian. There were lots of fish, chicken, always a Carvery section with pork, beef and turkey as some of the meats. You could always get pasta which they served mainly plain and the sauces separate. They had risotto and rices, vegetables and fish. A few of our favorite dishes were turkey meat balls and gravy, asparagus and salmon pasta, chicken tortillas, roast pork and vegetables. I enjoyed the salad too.

Puddings – ranged from cakes to mouses to stewed fruit. Usually cakes on holiday are a bit naff however these were gorgeous. Just like the cakes we bake.

Drinks – the drinks were self serve in the restaurant. They had drinks on tap, water, fizzy drinks, fresh juices, beer and red and white wine.

The drinks at the bars were all free minus branded spirits like Smirnoff. They also charged for drinks like hot chocolates which I thought was annoying. We had quite a few baby pina coladas which were delicious and my partner enjoyed the rum. There was 4 bars located in different areas so you didn’t need to go far for a cold drink.

Snacks – the snack bar had pizza, fresh sandwiches ham, ham and cheese, chips, burgers, hot dogs, tuna rolls, salads and ice creams. We only tried the tuna rolls and sandwiches which were delicious. It was funny as the sandwiches used 3 slices of bread so was a bit of a whopper but were lovely and fresh.

Al a carte – as part of the all inclusive you can visit the Al a carte restaurant once per week. The restaurant is called Tavern. We enjoyed a delicious 5 course Croatian meal. Daisy was catered for too, she had her very own starter and kids meal as well as trying all the food we ate too. You can choose between beef or fish. Some of the food we had were meats, fresh soup, beef, truffle pasta and desserts. Daisy has the same but for her main she had fish, cucumber, carrots and dips, potatoes and chicken and pepper skewers.

ENTERTAINMENT – It isn’t really our thing I have to be honest. We went once and Daisy had a really lovely time, but after splashing around all day long and playing and exploring the last thing I want to do is get up on stage and dance with Daisy. She loved having a boogie but she’s too young for me to comfortably sit back and watch from a far meaning I was right up there with her! What we did see seemed fun and engaging. They had things for all ages with characters that came around all the pools daily and then an entertainment program for the day and night but it’s not something I can share much about. They also had a kids club which we didn’t use however one lady mentioned there was a stay and play session and indoor play area, again we didn’t see this,

Instead, of an evening we either walked to town or went to the beach where Daisy enjoyed throwing stones in the sea or we visited the park which was on site. The park had a sunken trampoline which Daisy loved, also a swing and slide. It was enclosed and gated.

RABAC – This is the closest town. It was a flat block paved path which took 20 minutes to walk. It’s entirely buggy friendly with the Sea on your left the entire time meaning it’s a lovely walk. In the town you’ll come across supermarkets, chemist, restaurants, bars, souvenir shops, a spa, a lovely Harbour and more. In the Sea there are also lots of inflatable assault courses which the children all seemed to enjoy. There was a land train if you didn’t want to walk, we took the train back a few times and folded the buggy. It cost us around £15 for the 3 of us and dropped us right outside our hotel at the top of the steep hill which was a bonus.

BEACH – like I’ve mentioned, the hotel is on the side of a mountain meaning anything in front are beaches and views of the gorgeous Sea. It’s stunning. We saw dolphins on two separate occasions jumping out of the water, it was an incredible experience. The beaches are all pebbles except a man made sandy beach at the Sundance Bar which is part of a hotel I believe but we visited one evening. And I didn’t miss the sand!

The pebble beaches are stunning, the water is clear and warm and the water is calm. You need beach shoes as flip flops aren’t going to cut it! I had some I took from home but my partner brought some which cost 60 kuna which is around £7. They even do tiny tiny sizes for babies. Daisy wore her crocks but we could get some in her size if needed. She’s a small size 4.

The beaches are fairly busy but not to the point you can’t sit down and relax. The deck chairs and beds are all chargeable however we just sat on a towel.

EXCURSIONS – we only did one excursion which was the Nemo glass bottom boat. We paid 160 kuna for all 3 of us which is about £20. The boat ride lasted an hour which was enough for us. We were lucky and had the boat to ourselves. The Captain told us when to go downstairs. He took us to the reef where we saw lots of fishes. They were all blending with the grey coral but was still really cool to see and for the money it was great fun.

OVERALL – We had a brilliant time. We felt entirely safe, the people were all so friendly and I felt that Rabac was un-spoilt. We were one of a few British people once in town and I enjoyed being in Croatia with Croatian people. I think some popular resorts are overrun by us lovely brits and we just enjoyed soaking up the culture.